Durango R/T is SUV that looks like a racy minivan 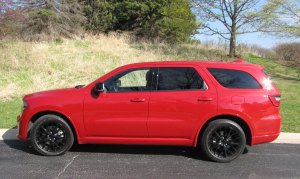 Dodge generally doesn’t try to blend in as a brand, favoring bolder styling than most competitors. That’s what some of us like about Dodge.

Dodge’s Durango though is a bit different in that it stands out from other large SUVs, especially with its wide full-body width taillights. Yet, in its own way, Durango blends in with Dodge’s own minivan styling. Several people asked me if this was a new Dodge minivan, when, to me at least, it seemed obvious the Durango is an SUV.

First, it looks bigger than a minivan, and to be honest, Dodge did its best to distinguish the bright red (Redline Pearl) SUV from anything on the road. The test ute was the R/T version, which means there’s a HEMI under the hood, and this also was the Blacktop edition. Who doesn’t like the sound of that? 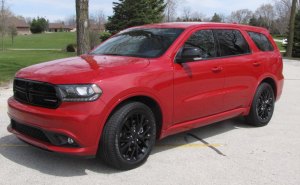 Naturally putting Chrysler’s muscle-bound HEMI V8, all 5.7 liters worth, under the hood gives it some rumble power. The V8 cranks 360 horsepower and a monster 390 ft.-lbs. of torque. Tromp the gas pedal and Durango R/T gallops to life. That’s no small deal for a 5,531-lb. SUV with all-wheel-drive. But this one feels energetic right from the get-go. END_OF_DOCUMENT_TOKEN_TO_BE_REPLACED