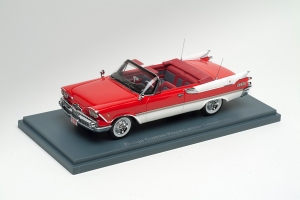 I admit to having a soft spot in my car styling heart for the “Forward Look” Chrysler and Dodge models created by Virgil Exner in the late 1950s and early ‘60s.

These big-finned beauties featured dramatic taillights and oodles of chrome trim on their fronts, sides and backs. My Uncle Paul had a white 1959 Chrysler 300 that barely fit in his garage with fins taller than me.

Dodge offered the Royal and Custom Royal from 1955-59 and the NEO model depicts the top-level Custom Royal in its heyday and final year, featuring dual jet exhaust taillights under each chrome-laden fin. The convertible featured a “Wedge” big-block V8 that used a wedge-shaped combustion chamber along with 383 cubic inches of displacement. The serious performance buyers snagged Dodge’s Super D-500 V8 overhead valve engine, a $415 option, with a massive 345 horsepower. 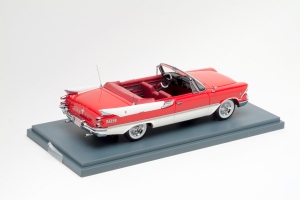 Royals and Custom Royals were available in hardtop, sedan, convertible and station wagon body styles and a base four-door listed at $2,934 in 1959. The premium Custom Royal convertible sold for $3,422 and 984 were sold that model year. Chrysler touted the use of front torsion bars and its mighty engines, plus push-button automatic transmissions. For 1959 there was an elliptical steering wheel and swivel front bucket seats too. END_OF_DOCUMENT_TOKEN_TO_BE_REPLACED