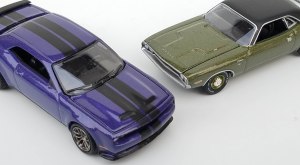 Like many car guys and gals I’ve been reading Hemmings automotive mags for years and love many of the covers!

So Auto World’s latest True 1:64 releases is a dead-on bull’s-eye for collectors as AW reproduces some of the cool cover cars from Hemmings’ Classic Car, Muscle Machines and Motor News. One of my favorites was the September 2019 Muscle Machines featuring a purple 2019 Dodge Challenger Hellcat Redeye and a vintage 1970 Challenger R/T.

Bingo, both cars are a part of the Release 4 A Series. Cool too because the 797-horsepower 2019 Challenger is a new casting while the 1970 features a new hood casting. More on those in a second. END_OF_DOCUMENT_TOKEN_TO_BE_REPLACED

I was into Trans Am racing almost from the start

Being raised in a car family how couldn’t I be? I wasn’t there at the start on March 25, 1966 when the SCCA (Sports Car Club of America) kicked it off at Sebring International Raceway but picked it up a couple of years later when American Motors started racing Javelins against the Mustangs, Cameros, Challengers, and Barracudas. There were some great racers like A.J. Foyt, Parnelli Jones, Peter Reveson, George Follmer, Swede Savage (no relation to Mark), and Mark Donohue. Since AMC was backing Donohue I got to see and meet him a couple of times when he raced at Road America. Fun times! And then it all sort of went away. END_OF_DOCUMENT_TOKEN_TO_BE_REPLACED

A tale of two companies

It all began almost 67 years to the date in a closed down pub in London where an industrial die-casting company, Lesney, was born, leading to a huge collector market for metal 1/64th scale model cars. Lesney is the creator of Matchbox vehicles. The name itself came into being when one of the owners’ daughters wanted to bring a toy to school but the school only allowed children to bring toys that could fit inside a matchbox so a scaled down version of a Lesney model went with her to school. Thinking they might have something, they used the one-0ff creation, the idea of selling a model of  a vehicle small enough to fit into the size of a matchbox. Matchbox was born and propelled Lesney to worldwide, mass-market success. END_OF_DOCUMENT_TOKEN_TO_BE_REPLACED

As a kid my first promo model was a pink ’63 VW Bug. I had my eye on this at the local hobby shop for the longest time lusting over it although I doubt at age five I knew what lust was. Dad said is was mine if I would give up dragging around my blanket, yup just like Linus from Peanuts. Tough but I did it for my first promo model and the rest is history. I bet I’m not alone either touching up promo models or redoing them the exact paint code. Dad brought home lots of them when he went to work for American Motors in 1963. I didn’t have to give anything up when those started rolling in the door and I had boxes of them. Most promo model cars will come in the colors that their big brothers were painted in like this rare red 1970 AMX that I have in my collection. Sure AMC made a red AMX in 1970 but this color is more of an approximate, not exact color match. I must have painted and detailed lots of them but none to the detail I have seen on the auction sites. END_OF_DOCUMENT_TOKEN_TO_BE_REPLACED

Hybrids even before the word was in vogue

I’m not blogging about one of the cars that all the manufactures make, I’m blogging about a promo model made by Marx Toy Company where metal and plastic combine to make an exceptionally detailed collector piece like this tin and plastic 1953 4 door “paper” woody station wagon.

The “Toy King” of the United States

That’s what Time magazine called Louis Marx in an 1955 article. Marx was said to have business savvy with the mind of a child because he could see into the eyes of kids and create models that they wanted. Beyond this car, Marx Toy Company, made tons of other toys such as a Alabama minstrel dancer and the Zippo climbing monkey. In 1922, these two toys accounted for 16 million in sales. A few years later he came back with whistling yo-yos, and they climbed in sales faster than Zippo and sales were not up to 100 million of these whistling and non-whistling toys. But the company is perhaps best know by people in my era when in 1964 they produced and distributed Rock ‘Em Sock ‘Em Robots and in the 70’s a large plastic tricycle called Big Wheel which is in the National Toy Hall of Fame. Marx didn’t make the jump with the new electronic toys hitting the market and was purchased by Quaker Oats who shut down the factory. Could you imagine how much fun it was working for this company? The only thing cooler would be working for Mattel at Hot Wheels. END_OF_DOCUMENT_TOKEN_TO_BE_REPLACED

Hey I just coined a new term. I’m always on eBay either selling or buying stuff. If you’re looking for something rare, that’s the place to start. I have a search parameter set up for promotional model cars and just they other day these two finds came up. What makes them unusual is that both of them were being sold by an eBayer located in Japan so they both have some miles on them. Well not literally. END_OF_DOCUMENT_TOKEN_TO_BE_REPLACED