Rover Defender goes mostly back to its off-road roots …

My introduction to Land Rover was as a kid when Matchbox created a sharp dark green boxy version with brown plastic luggage atop its roof. Then there was Daktari, the TV show about a wild animal veterinarian running the African savanna in a Rover.

I still think of Land Rovers as those boxy utilitarian beasts that mostly British folks used to roam Africa’s plains in search of wild game. One hopes now it was mostly for photography purposes instead of butchery.

Indeed, off-road prowess is Land Rover’s claim to fame, much like Jeep’s reputation was built on its ruggedness and ability to go anywhere, crushing rocks, sloshing through mud and swamp, swooshing around sand dunes and fording rivers. Then came luxury!

Since 1997 when Land Rover last sold a Defender in the U.S. market, Rover has become a luxury sport-utility nameplate with its Range Rover lineup. That’s all well and good, but some of the monied off-roading crowd also longed for a more rugged Defender type vehicle to take mudding, etc.

Well, the Defender 110 is back, and it’s an off-roader, loaded with technology AND luxury, although not the leather-slathered luxo of Range Rovers.

First, Defender looks more boxy and Land Roveresque than Range Rovers. Its designers have successfully managed a modern retro look that some may think looks like Defender was built of Legos. I like it! 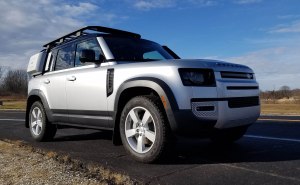 But looks don’t ford rivers or mount rocks and Rover backs up Defender’s rugged looks with a strong 3.0-liter I6 that’s turbocharged and supercharged to create 395 horsepower. That’s certainly more than enough to sling the AWD vehicle to 60 mph in less than six seconds. A quick run-up on a highway entry ramp is a strong 93 mph.

Add light, easy handling and a compliant ride and this off-roader feels perfectly adept on city streets and Wisconsin’s rustic rural roads. I only went off-road briefly, but the air suspension here easily sucked up major bumps. Credit goes to that suspension and the fact this Defender features a unibody build, with independent suspension, unlike the older body-on-frame truck of the past with its solid rear axle.

Those air shocks also allow the Defender to be raised and lowered (by button) a couple inches for easier ingress and egress or to allow more convenient cargo loading. For convenience there also are a couple buttons inside the rear-opening door (not something I favor) to lower the tail. 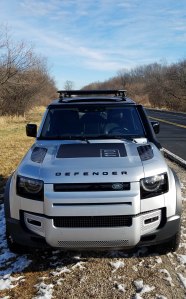 But for any serious off-roader it’s the Terrain Response system that is Rover’s biggest selling point, although engaging it is a tad confusing. While most off-roading utes now allow you to turn a dial to engage off-roading choices, the Land Rover insists you use its less than intuitive infotainment screen, and other dash buttons.

At the home screen you are presented 12 choices, which DO make sense. There’s Climate, Seats, Towing & Trailers, Camera, Eco Data and more.

One is 4×4, the correct choice for off-road settings. That leads to another screen where you press Configurable TR, then another screen where you press OK to accept some legalistic mumbo jumbo. Now it sort of indicates you should press a button on the center stack between the two large climate control knobs. Do that and you are presented nine choices, of which Automatic is what you’ll want for daily driving, especially if streets are snowy.

Other modes are Eco, Comfort (also a good daily driver), Grass/Gravel, Sand, Rock Crawl, Wade, and Configurable. Be aware that if you don’t keep punching the button to move quickly from one setting to the next the screen zeros out and you need to start over.

Note too that if you choose Wade, the Defender will use sensors to tell you if you’re about to wade too deep into a puddle, stream or lake. Defender will wade in water up to 35.4 inches and features a big black snorkel on the driver’s side A-pillar to help it breathe in deep water.

For the record that snorkel and a giant roof rack that appears strong enough to carry several large dead beasts atop the roof, are part of a safari-inspired $4,800 option package. That also includes a snazzy matte black hood decal, mud flaps, spare wheel cover, wheel arch protection and a nifty, but odd, side-mount gear carrier that hangs off the passenger’s side rear window.

Quick note on that exterior gear carrier. You must slam it shut to get it to latch, just turning the key back to its starting position won’t do it. Found that out as it was flapping in the breeze when I took to the highway.

From a driving standpoint (which is the main point), the Defender is pleasant and powerful. It accelerates quickly, the 8-speed automatic transmission shifts efficiently and without fanfare, steering is light and precise and ride is comfortable. Grip is good because you have AWD, tested in moderate snow during my drive.

Inside, the silver test truck featured black cloth seats with perforated leather inserts and looked rather sparse for trim in that the doors and console feature panels with bolt heads to give it a Wild Kingdom ambiance. Yet the dash was all modern and high-tech with a 10-inch infotainment screen and digital gauges. While the dash itself was black with a soft almost foamy suede-like material on its top that is designed with a rounded edge for easy gripping as you slosh through the outback.

Seats are moderately supportive and feature three memory settings while the steering wheel is a power tilt/telescope number. Most useful is an open front console with plenty of storage room for maps, sunglasses, binoculars and the like. A wireless charger is in the console section with enclosed storage box and cup holders.

I tested the First Edition version of the 4-door Defender 110 and that adds a few other goodies of note. Most obvious is a large panoramic sunroof offering a great view of that monster roof rack. Other doodads include a refrigerated storage box between the front seats, a fine Meridian sound system and 12-way powered heated front seats and a heated steering wheel.

Add-ons included a third-row seat that folds down into the cargo floor in back. It adds $1,200 and is basically useless for passengers as there’s no legroom. Save the dough! While you’re at it you can save the $1.075 for three-row climate controls.

Other options were minimal in cost and need, but added up to $79,190 for a grand total.

If you want the ultimate Defender that would be the X model at $80,900 and adds an electronic differential and All Terrain Progress Control System that when engaged acts similarly to a cruise control, but on low traction surfaces. That, to me, is defeating the purpose of a driver going off-road for fun and adventure, but it’s a clever feature.

Less monied buyers may opt too for the Standard Defender at $49,990, plus $1,025 delivery charge. It uses a less exuberant 2.0-liter turbocharged 4-cylinder engine that makes a still substantial 296 horsepower. Rover says it’ll do 0-60 mph in 7.7 seconds or about two seconds slower than the I6-equipped models.

Land Rover also offers S, SE and HSE trims on its ladder up to the First Edition and X. The HSE is aimed more at luxury with leather and wool seats.

Downsides here include the upper end pricing and poor gas mileage. I got just 16.1 mpg while the EPA rates Defender at 17 mpg city and 22 highway. I also don’t care for the rear-opening door in place of a hatch, but that’s necessitated by putting the heavy spare tire on the door.

This one also had no running boards, which is good for off-roading, but terrible for comfort on a daily basis as the step-up is enormous. That roof rack also creates major wind noise, the outside storage box blocks a big portion of passenger-side rear views via the mirror and the test vehicle’s AWD system groaned considerably when the ute was coasting.

At nearly $80k I’d expect more refinement, although I fully realize Defender is aimed more at avid off-roaders with money to burn. Defender is a mix of retro rough and tough and modern amenities.

Folks aiming more for off-roading basics will find a Jeep Wrangler Unlimited more affordable, or a basic Wrangler is a bargain for about $28,000 and both will climb rocks and slosh mud. Off-roaders with money, and an even larger ego, may want to consider Mercedes-Benz G-Wagen at $130k and change.

Made in: Nitra, Slovakia