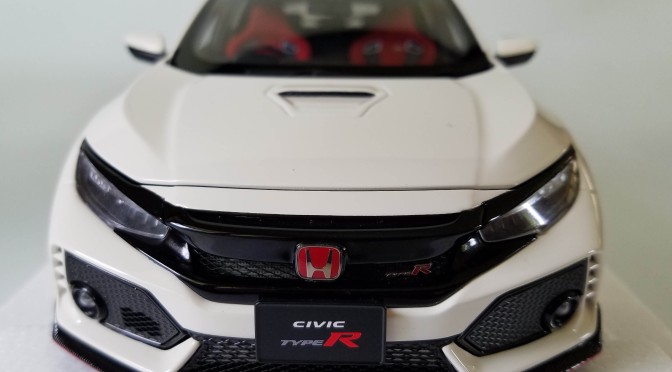 When I was a youngster and Honda Civics were new to the U.S. market, they were cute, nimble econoboxes that got great gas mileage and weren’t very expensive.

Now Civic has grown to be as large as an Accord used to be, but remain Honda’s main entry in the compact car market. Plus, now there’s a Type R in the U.S., as of 2017, that takes the sporty Civic to its logical, or maybe illogical performance extreme. The 2020 Honda Civic Type R is one hot hatchback, and Autoart does a fine job of bringing it to the 1/18 scale die-cast market.

Our review car was Championship White and features opening doors (all 4), plus the hatch and hood. Front wheels are steerable too. 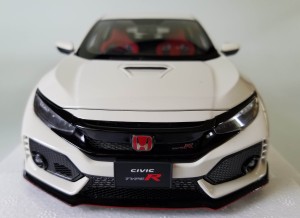 While the first Type R was based on the sixth-gen Civic and debuted in Japan in 1997, it took until 2017 for the U.S. market to receive the ultimate performance version. The Type R simply rocks.

Under its hood is a turbocharged and intercooled 2.0-liter I4 delivering 306 horsepower and 295 lb.-ft. of torque. Top speed is 169 mph. Remember, this is a Civic. Keeping that throbbing engine cool is a functional air scoop atop the hood along with functional front fender vents.

Keeping its wheels snuggly on the ground are a variety of ground effects, from side carbon fiber skirting and nose wing to a stout wing that sprouts from the hatch and finally a carbon fiber diffuser under its tail. 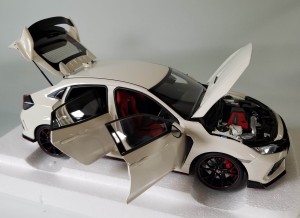 Sound and speed are enhanced by a triple exhaust system, plus the chassis is made of lightweight metals and the hood is aluminum. Dual-axis MacPherson strut front suspension cuts down on torque steer from the front drive wheels.

Stopping comes from Brembo discs and calipers and a six-speed manual is standard.

Price is about $38,000 with delivery, so easily $10 grand more than most folks would pay for a family-moving version.

Sadly die-cast composite models can’t pack all the power and punch, but they can look just like the original that may be doing donuts in your driveway. Autoart’s Civic Type R is a near perfect match, just two minor bits forgotten. More on that in a bit.

All the exterior sheet metal, window trim and accent pieces are here, plus as mentioned earlier, everything opens. Bravo!

Start at the nose and the R Type-specific red-background Honda badge is there on the blacked out mesh grille, a Type R photo-etched logo just off to the right. All the air ducts are here, mesh in the hood scoop, lower fascia running lights and slim smoked headlight lenses.

And yes, there’s the red trim line along the edge of the chin spoiler that runs down the side of the lower ground effects on the side and tail’s skirting. Cool too are the red stripes on the piano black alloy wheels that again feature the red-backed Honda logo on their hubs. Behind those are large disc brakes with red Brembo calipers and the tires are non-branded low-pro performance rubber.

In back there’s the opening hatch with its strakes (vortex generators) just above the window’s edge. Those are on the full-sized model and direct air cleanly over that big gloss black wing in back. Other details include the three chrome-tipped exhausts, red Honda logo and PE Civic Type R lettering, oh, and a Civic Type R license plate, in case you forgot what this was.

Under the hood is a sweetly detailed engine and supporting bits all packed neatly in. I like the snazzy red engine cover that mimics that on the full-size car, plus big turbo air tube, battery and more, including a thin wire hood prop that lends accuracy, but isn’t needed to hold the hood up. Even the hood’s underside is finely detailed to match the road-version.

After all that you’d think everything is perfect on the exterior, and for most folks it will seem so. However, I noticed the little body-colored strikes over the black rear air grilles are missing, yet the red vertical reflectors are there. Also, the front side reflectors just in front of the wheels are clear, not amber. Small nits to be sure.

Seats on this right-drive model are beautifully shaped performance numbers with red cushions and black trim in front. Black cloth shoulder belts are woven through the front seat backs, while in back the black seats feature red seat belts.

Autoart keeps the iconic red Type R trim going on the dash edges and door trim, plus the inner lower portion of the thick steering wheel. Dash detail is sharp too with visible gauges and trim around the big console-mounted shifter. Everything else is as it should be too, even three pedals on the floor.

The Type R is another stellar effort from Autoart to match the full-size car’s appearance while providing a strong value with all the opening elements and fine engine bay detailing.  Note too that in addition to white, the Type R is available in red, black, blue and polished metal.