Mercedes-Benz has been dominating Formula 1 racing for six years and it has a long history of dominant race cars dating back to the 1930s. Famous race drivers such as Juan Manuel Fangio, Stirling Moss, and now Lewis Hamilton have put Mercedes squarely in the public eye.

Winning is the name of Mercedes game and Mercedes has been slapping an exclamation point on that in its road cars since 1967 via AMG. That’s Mercedes high-performance division, a separate unit that virtually customizes certain Mercedes-Benz vehicles to near race standards. AMG was launched by Daimler, Mercedes’ parent.

All that to introduce this week’s phenomenal test car, the Mercedes-Benz AMG GT C Roadster. That’s a lot of initials, but know that with AMG in there it means this Mercedes will rock like a racer. The GT is Mercedes two-seat coupe and the C is its second raciest version, the R being raciest.

Being summer, it was particularly entertaining to have the Roadster version, which means it has a power black convertible top. Push up on the button located near the windshield frame’s top and within about 5 seconds, the top powers down. Press down on the button and it goes up. Seemingly backwards, but simple!

RELATED VIDEO: Experience this car. Hop in with Mark and go for a spin.

The rest of the roadster is not so simple, but that’s what makes it a hoot to drive and as near a racer as most of us would ever drive on city streets. Ah, but the price of entry makes it unlikely middle-class folks could ever do that. Base AMG GT roadster pricing is $163,395, including delivery fee. Add on a handful of pricey extras, including its matte Brilliant Blue Magno paint job at $3,950, and the test car hit $179,795.

That my friends, is nearly double what we paid for our house about three decades ago.

OK, we know it’s pricey and racy and rare. I mean people were asking to take pictures of it at the gas station, which it visits regularly as it’s rated just 15 mpg city and 20 highway, earning it a $1,000 gas guzzler tax. Pfft! Like that would slow someone from buying this rolling bit of automotive art. I got 15.2 mpg for the week, with a fair amount of highway cruising and entry-ramp speed testing.

From the outside the GT C looks special from its ultra-long nose and mighty Mercedes toothy grille with monster, somewhat cartoonish Mercedes peace sign logo, to its rounded tail with power rear wing and quad exhausts. Oh, it’s a looker. 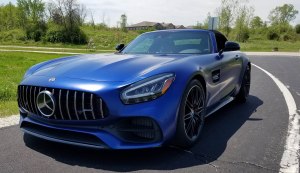 Yet it is the GT C’s performance that warrants big bucks.

First, there’s the throbbing 4.0-liter twin-turbo V8 under its expansive hood. This is hand-made by AMG with the builder’s signature atop the engine. This one added a lightweight carbon fiber engine cover for $1,500, still with the signature.

Power is instantaneous from the bi-turbo V8 and it’ll push you back into your saddle brown leather seats with a thud. Pedal down, bam and the rear-drive GT pounces into action on a highway entry ramp, like you’re heading out of the pits onto the race track. Triple digits are not impossible on a ramp. Don’t ask how I know!

Power is impressive and even though limited by a governor (is that legal?) the top speed is rated at 196 mph. Think how fast you could get to Madison or Chicago! According to Car & Driver magazine’s track tests, this 550-horsepower V8 will do 0 to 60 mph in 3 seconds. Impressive! And a quarter mile flashes by in 11.5 seconds as you hit 128 mph, says C&D. You need something faster? Certain Porsche 911 GTS models would compete.

Shifts are well handled by a 7-speed AMG Speedshift automatic, but there are paddle shifters behind the wheel if you want to do the shifting yourself. A manual transmission enabling button is on the thick raised console to allow this. Unfortunately it’s also easy to hit with an elbow, so a couple times I found myself in manual mode and stuck in a low gear until I noticed the revs were way up.

As with so many cars these days there also are drive mode selections via Dynamic Select buttons on the console. Sport and Race modes will boost power while holding lower gears longer and shifting superfast like you’re racing, which one could assume you might do with this. Think about renting Road America for a day!

Those drive modes also adjust suspension, stability control, throttle response and engine tone. Oh yes, the engine tone is exquisite and there’s even a button for that, both on the console and steering wheel. Red or performance mode adds grumble and crackle that will definitely irritate the neighbors, but impress folks at the country club, unless they are about to putt! 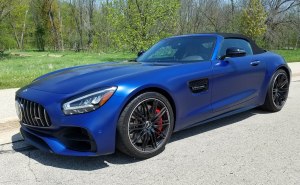 Handling is near race car precise in Normal mode and only improves in the sportier settings. The Mercedes has electrohydraulic steering that feels smooth and fluid but still precise. It keeps wheel effort at a mild to medium pressure, never too heavy.

Ride, well, this is a racer really. So even on Comfort setting the ride is stiff and can be a bit rough on city streets. This one is much more comfortable on the freeway or smooth blacktop roads. Not much ground clearance either, about three inches, so watch it on parking lot entries.

Inside, the beautiful matte metallic blue test car was a handsome and luxurious perforated saddle brown leather interior with black leather-feel dash with saddle stitching. Passengers were impressed with the look and feel, but all agreed it was easy to get in, but not so easy to extract oneself. As a shorter driver I found it most difficult to get my foot out of the space between the door sill and power seat. 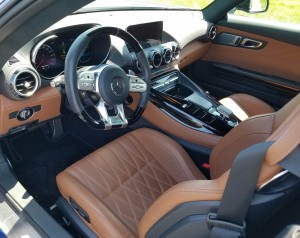 Yes, these are powered seats, including power side bolsters to further tighten or loosen the side cushions top or bottom. Seats are heated and cooled too with three memory settings. Seat bottoms are on the hard side, but the leather helps soften it some. There’s also a flat-bottomed performance steering wheel wrapped in leather with piano black gloss trim, same as on the console, which is about elbow height.

A-pillars and side mirrors are large and somewhat of a sight-line impairment, but of course there are all the usual electronic warning systems to help keep the driver out of trouble. So, blind-spot, lane-keeping, adaptive braking, smart cruise control and all that.

The dash includes an 8.4-inch screen and touchpad on the console for adjustment. Not my favorite, but there are easy-to-use climate control buttons along with those for seat heat and cooling.

A button on the console also powers up the rear spoiler, which one might need once you exceed 100 mph or so. I was a bit surprised the spoiler doesn’t self-deploy when needed. Or maybe it would, if I had been driving faster.

The black gloss piano lacquer trim adds $750 and the fancy AMG split 10-spoke black forged wheels with summer performance tires add $1,700. Tires are 19 inches in front and wider 20-inchers in the rear. The Distronic cruise control adds $2,250 and a Burmester surround-sound system another $4,500. All that helped push the car to its near $180 grand price tag.

I’d skip the fancy stereo as the engine is what you want to hear here, and it’s about all you can hear, that and road noise, once the top is down. Not much wind in the cockpit, but yes, you hear everything once the roof is down.

Practicality? Come on, get real.

I guess we can discuss trunk space, which is 5.8 cubic feet. That’s not horrible and it looks as if two overnight bags will fit. But then again you’re likely taking this roadster only on a weekend outing with spouse or significant other.

This is not a cross-country road car, unless you’re simply going for a speed run, tickets be damned! 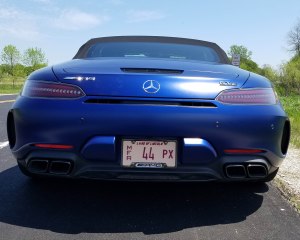 Made in: Sindelfingen, Germany