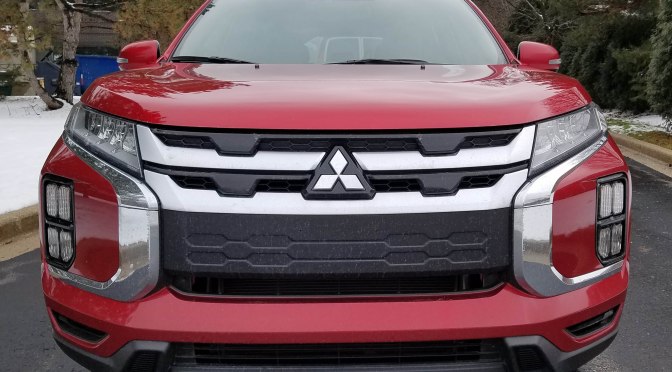 By that I mean it’s nothing fancy, but it’s a solid family hauler with four-wheel-drive, enough safety equipment to satisfy most folks and a sporty new nose to refresh its looks so it doesn’t look like the styling fairy has passed it by.

Mitsubishi is a small player in the U.S. market, but the Outlander Sport is the biggest arrow in its quiver. Last year the Japanese carmaker, who sells well in other parts of the world, sold just 121,046 vehicles in the U.S. Yet that was an increase and way more than when it bottomed out in 2009 at just 53,986 units. It’s still a far cry from 2002 though, when Mitsubishi’s sales peaked at 345,915 vehicles. 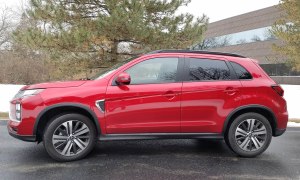 But if you are a bit of a contrarian who likes to pull for the little guy, well, Mitsubishi’s Outlander Sport (smaller than the regular Outlander), may just be for you.

The Sport is certainly not the finest mainstream small crossover on the market, the Mazda CX-5, Honda CR-V, Toyota RAV4, Subaru Forester, and Hyundai Tucson, to name a few, offer a more refined feel, ride, power and finish. But, Mitsubishi’s Sport costs a lot less than each of those, while fulfilling all the needs most of us have for a small family crossover.

Power comes from one of two engines, a 2.0-liter I4 that creates 148 horsepower, or the 168-horse 2.4-liter I4 that was in the top-level GT that I tested. Power is sufficient and if you tromp the accelerator will give the Outlander Sport good acceleration as you get on the highway. 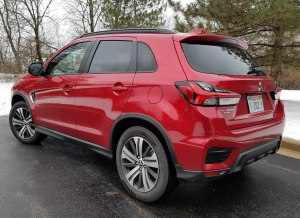 Like Subarus and many Nissans, the Sport’s powerplant is hooked up to a CVT, Continuously Variable Transmission. It shifts smoothly, but is a groaner, much like Subaru’s. Both work fine, but as you accelerate hard the engine and tranny groan like they are working pretty hard to get you there. Let off the gas to cruise and it quiets right down.

Handling is actually pretty good with only moderate play in the steering wheel, and the crossover handles tight turns well with nearly no body lean. I found the Sport an easy drive on the freeway, simple to keep in the lane with no wander, so better than most large SUVs and pickups. 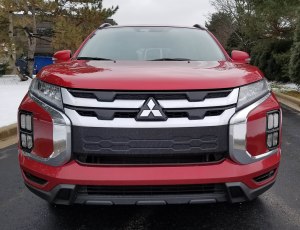 Ride is decent too, but not as smooth as many of the small crossovers with longer wheelbases. This one’s wheelbase is 105.1 inches, about the same as a Forester, but the ride feels less refined. No, it’s not rough, just a bit bumpy and feels less well dampened. The Outlander Sport also rides on 18-inch tires, while some now go with 19-inchers.

So performance is fine, but not quite up to most competitors. Yet, for the starting price of $27,990, including delivery, you’d be hard pressed to find much better that also has the features standard on the GT model, some of which are standard even on the base ES. Its list price is even more attractive at $23,590 for a front-wheel drive model and a bit over $25 grand for one with four-wheel drive.

But standard here are the key safety systems we all likely would want, including blind-spot warning, forward collision mitigation with pedestrian recognition, automatic high beam headlights, lane change assist, rear cross-traffic alert and lane departure, which can be turned off.

All of that is standard on all models from the SE up, and it starts at $25,290. Only the base model comes without all the safety systems.

Note too that all models have a newly restyled nose for 2020, including LED headlights and a better looking grille that makes Outlander look a bit more muscular than in the past.

Mitsubishi also would like you to know that all trims beyond the base come with Apple CarPlay and Android Auto so you can hook your phone up and stream songs or use your phone’s GPS.

Inside the GT was plain, but nice looking. There’s no leather on the seats, but the GT comes with soft-touch material and the black seats featured red stitching in a horizontal pattern to give the interior a bit of style. The dash was hard black plastic, as was door trim, and there was a black gloss trim around the wheel, air vents and infotainment screen, an 8-incher. Knobs and console trim was matte silver with chrome door release handles and some wheel and door trim. 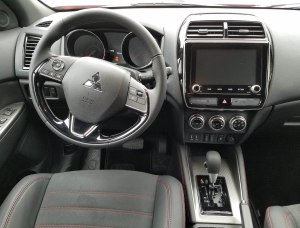 The dash is simple and well laid out and that good-sized screen was easy to use, as were the climate control knobs. There’s pushbutton start and automatic lights, plus power mirrors. Cruise control is the old standard version, not smart cruise, but for this price most of us could live with that.

No wireless phone charging here either, but there are adequate outlets in the console under the dash’s center stack to keep your phone operational. Likewise, overhead the sun visors did not slide, but were sizeable enough to mostly do the job. Ironically, in my mind at least, while costs were saved on sun visors and such, HomeLink is built into the rearview mirror.

Seating is manual, but comfortable with supportive well-formed seats. And the front ones also are heated, with two settings. But there’s no heated steering wheel and no sunroof overhead.

The rear hatch also isn’t powered, as most are these days. But that certainly helps keep the cost down and really, how hard is it to open a rear hatch or pull it down? Cargo room is reasonable too with 21.7 cubic feet of space behind the rear seat and up to 49.5 cubic feet when the rear seats are folded down.

Outlander Sport is front-drive until you engage the four-wheel-drive system, but that’s easy. Press a large button just behind the console-mounted shifter and you’re instantly in 4WD. I had this one during a couple of significant snowfalls and its traction was stout, even when I had to run through six or so inches of crunchy icy snow.

Finally, consider gas mileage, which is just meh here. I got only 20.1 miles per gallon, but again, some of my driving was in slippery conditions. The EPA rates this Outlander Sport with the larger engine at 23 mpg city and 28 highway, which may be possible on dry roads and in warmer weather.

I was happy though that Mitsubishi let the Sport GT be, and didn’t load it up with a ton of options. The test crossover had a spiffy red diamond paint job that costs $595 extra, and added floor mats and a cargo cover. Even with that the crossover ended up at $28,920.

Again, try to get all these features, plus 4WD for that price from many other makers. This is a bargain for those of us without Wall Street portfolios and who need simple transportation with fine safety systems for ourselves and our families.

Misses: Engine/tranny growl a lot, like a Subaru, but has reasonable power. Less refined ride than many competitors, no heated wheel, no sunroof and meh fuel economy.

Made in: Kurashiki, Japan