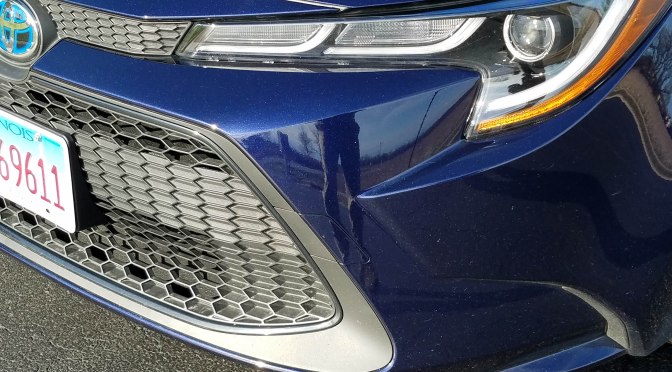 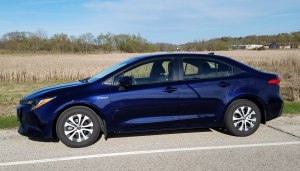 After 60 years in the U.S. market Toyota continues to impress when it comes to value and its redesigned 2020 Corolla is a prime example.

Toyota revamped its popular Corolla to lower its ride height, widen its track, lower the cowl for better visibility and looks and then shorten the front overhang and lengthen its rear overhang. Still, you likely won’t drop a molar in excitement, but the compact is modestly pleasing to the eye.

More important if you enjoy driving, the Corolla abandons its torsion beam rear suspension for an independent setup, just the opposite of what Mazda has done with the Mazda3 that I tested last week. The new setup improves Corolla’s handling. 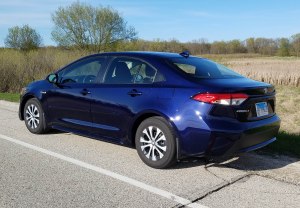 Add to all this Toyota’s addition of a hybrid version of the Corolla LE, its trim level one up from the base L model. The hybrid is an absolute home run for a car meant to be a solid single. The tested hybrid is inexpensive in the extreme, and hyper efficient to operate. I got an amazing 55 miles per gallon, even better than the EPA estimates of 53 mpg city and 52 highway.

The tested hybrid LE costs barely more than its gas-only powered cousins. It lists at $23,880 with delivery and adding just a few options this one was just $24,467.

Let’s focus on the tested hybrid though.

Handling is light and easy, the car simple to maneuver around town and in tight parking lots. Steering effort is light and while far from sporty the car is easy to control, fine for a mass market sedan.

Ride is above average too with that new rear suspension helping provide a more controlled ride on choppy roads. You’ll still feel the big bumps, but they don’t create a severe ride. 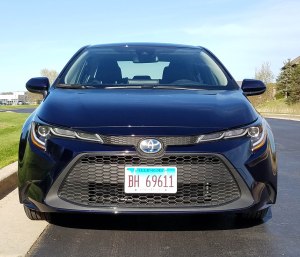 Then there’s acceleration, well sort of. There’s no hiding that the hybrid power feels mild as you accelerate to cruising and highway speeds. The gas and electric power here is rated at 121 horsepower, but with just 105 lb.-ft. of torque. Naturally the hybrid’s electric power gives you a decent initial boost of power up to about 10 mph, then there’s a lag and the car’s power plant works methodically to reach 40 and beyond.

Luckily there is a drive mode button on the console that allows you to shift to a Power setting. You won’t suffer from being pushed hard back into the seat, but Power (which I used almost constantly) does increase the pace of acceleration. Still, the engine sounds like it’s working pretty hard in this mode.

Shifting from the electronically controlled CVT though is smooth and seamless. In fact you hardly notice it at all. Plus there’s a stop/go feature to save fuel when the car is at rest.

Once up to speed the Corolla rides and handles well and the interior is relatively quiet too as Toyota has worked to deaden road noise some.

The interior also is simple and the dash well laid out, but this is where you realize the Corolla is an entry-level sedan. Dash and door trim remains a hard plastic and the steering wheel also is a textured plastic compound. All functional and easy to clean, but not much pizazz here.

But then at this price you’re looking for simple, functional and comfortable. Corolla is right on the mark there.

The cloth seats are well shaped to give lower back and hip support. They’re comfy, in fact more comfortable than seats in some much pricier cars. And while we all appreciate leather seating, the cloth was nice and warm on a few 40-degree mornings. The seats are manually adjusted, but the driver’s seat has a pump handle on its side to raise and lower it for a better seating position.

Dash controls are simple and Toyota includes an 8-inch infotainment screen mid-dash, looking much like a vertical iPad. The screen is easy to figure out and use, even when driving, and there are buttons and knobs on either side to facilitate some key functions.

Note there is no navigation system on the car, but you can plug in your phone for that, right?

In lieu of navigation many of us would be happy to have Toyota’s Safety Sense features, which are standard. They include pre-collision warning with pedestrian recognition, lane departure alert with steering assist (can be turned off), smart cruise control, road sign reading assist, automatic high-beam headlights, smart-stop and an electronic parking brake.

Corolla also offers good head and legroom front and rear, enough so that you can carry a family of four, provided none are imminently trying out for the NBA. Rear seats split and fold and the trunk is moderately sized at 13.2 cubic feet.

Other interior pluses include sun visors that flip and extend, a manual tilt/telescope steering wheel with trip computer and cruise functions, among others, on the hub. There’s also an inside fuel door release.

While I can’t praise the hybrid’s fuel economy enough, know that all Corolla models achieve good mpg numbers. The models with only the 1.8-liter I4 are rated at 30 mpg city and 38 mpg highway, while the sportier models with the 2.0-liter I4 are rated 29 mpg city and 36 highway. With gas prices hitting $3 a gallon again this becomes another big plus in the Corolla lineup’s favor.

Lastly, I think a goodly number of drivers would be happy to go with a hybrid if it didn’t look as oddly shaped as some on the market. Yes Prius, I’m looking at you. So the Corolla offers economy minded buyers a better styling choice while allowing them to experience the joy of 50 mpg driving and fewer trips to the gas station.

If you’re among the sedan lovers looking for economy, both in initial and weekly running costs, the Corolla hybrid should be on your potential buy list.