As I mentioned in my introduction to this issue, Round2’s Johnny Lightning brand celebrates its 50th Anniversary this year and while various special releases are eminent, its Racing Champions brand continues to make similarly excellent 1/64 die-cast cars that are available right now.

I love these little beauties, and you will too once you snag a few to fill holes in your collection, plus they’re high value, six vehicles for $41.99. Say you love Hot Wheels, well, they’re cheaper all right, but check out the detail here, starting with opening hoods.

Size matters and with this size car you can collect hundreds of different makes and models and still have room for your plastic 1/24 or 1/25 muscle cars, etc., or some highly detailed 1/18 die-cast cars.

We owned several Mopar and GM cars when I was young and I gotta say I still like those 1950s to early 1970s models.

This release packs in four Chevies and a Plymouth to tickle my fancy, and the old Ford pickup is spiffy too.

I’m starting with the 1971 Barracuda because that was one of my dream cars as a kid. As close as I got in real life was my ’71 Duster with a slant six. But this candy apple green Cuda is trimmed in black and has a low-riding front end and a big 440 printed on both doors.

There are chrome bumpers front and rear, sharply detailed head and taillights, body-side reflectors front and rear, and a giant black air scoop inset in the hood and a matte black roof simulating popular vinyl tops of the day. Of course, the hood opens to reveal the orange V8 beneath. The interior is black and features bucket seats. Below are chrome five-spoke racing wheels. And all Racing Champs have black treaded soft plastic tires.

Equally cool is the metallic sandstone brown 1986 Chevy El Camino with contrasting copper lower body stripes and tonneau cover. Again, the detail is what will sell you on these 1/64 scale vehicles. Window trim and door handles are painted silver and there’s even a slender B-pillar window behind the massive doors. A chrome bumper in back and painted one in front to match the side cladding gives this a real 1980s look. Again, the hood opens to reveal a silver engine block.

Taking the truckin world to another level is the shag machine represented by the 1975 Chevy Van decked out in a tasteful metallic copper tone with period-correct custom multi-line stripes from nose to across the twin panel van doors that open (stiffly) in the back. But oh my, look at that pony mural on the side, if that doesn’t say this van belongs to studly ‘70s dude whose shopping for shag carpet for the tail, I don’t know what does.

There are chrome bumpers front and rear and a nicely executed grille with black between the chrome bars to give it depth and painted chrome windshield surround with molded in wipers. Inside there’s a net between the front and rear compartment, two medium brown tall bucket seats and the giant console all these vans sported.

–        The 1966 Chevrolet Nova SS here is a dark maroon, tending toward purple that accentuates its boxy styling. Tires are redlines and all windows are outlined in silver paint, plus there are logos imprinted on both sides, including Super Sport script on each rear fender. My uncle had one of these in white and this brings back the memories of riding around town in that sweet coupe. 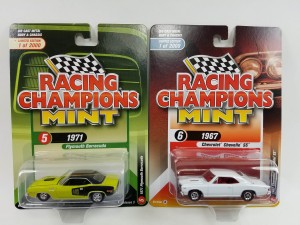 –        A pure white 1967 Chevrolet Chevelle SS is the final Chevy in the lot. It too has redline tires, but sportier 5-spoke chrome wheels and nicely detailed nose and tail. Interior is red, as it should be in a white car and the wipers and chrome hood louvers are nicely detailed too.

–        Finally, this metallic blue 1940 Ford pickup is a beauty with its whitewall tires with red and chrome wheels behind them to add flair to a souped up work truck. The grille is a beautiful chrome as is the front bumper with raised guard and hoods over the headlights. There’s even an extended chrome mirror. Sharp!

Remember all these cars and trucks have opening hoods and these series are limited to 2000 cars each. The Release 3B offers the same vehicles, but in all different colors and trims. All are great fun because they recall those earlier years when cars and trucks had style and changed from year to year.