Not much seems to have changed with Mazda’s stylish small crossover, the CX-3, since I last tested it a couple years ago.

I mean it gained two horsepower (big whoop), but really nothing much needed to change. I’d still like more horsepower, but at least there’s a Sport mode toggle on the console to boost power when you need it.

In Sport mode the tested bright metallic red (Soul Red Crystal Metallic) CX-3 Grand Touring with AWD, is peppy. It’ll jump away from traffic lights and ramp up to freeway speeds easily. In Normal mode acceleration is moderate at best, and you’ll be in Normal mode most often.

But it’s the sporty handling and light feel of the little crossover that makes it a delight to drive. This carries over that zoom-zoom feeling Mazda’s have become famous for, even if Mazda no longer markets them that way.

Drive hard into a highway curve or into a turn on a winding country road and the CX-3 remains stable and feels lively. I know I liken this to Go-Kart handling, which some may argue, but it is light and fun, a joy to drive on any curve-infused road.

Ride? Well, the crossover only has a 101.2-inch wheelbase, so it’s bumpy on city streets. You feel road imperfections, of which we have many in Wisconsin, and expansion joints on cement streets can be a bit annoying. For a smoother ride move up to Mazda’s CX-5.

Power here comes from Mazda’s SkyActiv-G 2.0-liter I4, now making 148 horsepower and 146 ft.-lbs. of torque. While that feels enthusiastic in Sport mode, you’ll need to toggle back to the normal setting after about 40 mph or hear the engine roar like it’s ready for takeoff. The Sport mode holds the engine’s revs way too long and eventually will suck down gas mileage along with messing with your ear drums.

But as I said last drive, toggling the Sport mode is almost as much fun as shifting a manual transmission – almost.

Add to that the practicality of all-wheel-drive to help steady the little crossover in winter slop, plus fuel economy is good. I got 27.8 miles per gallon in about a 60/40 split, city to highway. Mazda uses its patented SkyActiv system for cleaner, more efficient fuel use, and the CX-3 is rated 27 mpg city and 32 mpg highway.

Shifts from the 6-speed SkyActiv Sport automatic transmission were smooth and well mated to the crossover, and braking (4-wheel discs) also is fine.

The Grand Touring model is the top trim level. It kicks up the interior finish a couple notches with leather seating and attractive trim. This one also added, for $710, three-level heated front seats, a 6-way power driver’s seat and heated steering wheel. Several riders commented on the attractiveness of the Mazda’s interior, especially so at this price point.

The red test vehicle had a black dash, gray suede door panels, and oatmeal perforated leather seats with gray piping. Seats are well formed to give side and hip support and these also featured three-level heat. The heated leather steering wheel is nice too, but only heated from about 10-2 down to 8-4 on the grip area.

While not roomy inside, there’s space for four moderate-sized adults. Helps if the front seat folks don’t have long legs that require the front seats to be back too far. Headroom was fine front and rear. With that reasonable interior space the cargo area is not huge. But as with other hatchbacks and crossovers, the rear seats split and fold flat to increase storage room, so fine if there only a couple folks are taking a trip.

Mazda’s dash is easy to see and read all gauges, but the large infotainment screen is mostly operated via a knob on the console. It’s less than intuitive and best dealt with while parked. In fact, the touchscreen doesn’t allow you to adjust anything while the car is in motion. With old radio systems including 6 preset buttons it was easy to quickly select a station with barely a glance to the dash. I guess not allowing you to change stations while in motion is today’s answer to overly complex radios.

Overhead is a sunroof and shade and the sun visors feature extenders.

To the left of the steering wheel is a lane departure system on/off button on the dash, plus a head-up display rises from behind the steering wheel to help keep you in tune with the car’s speed. Other safety systems include a blind-spot warning system, a rearview camera and both smart cruise control and a Smart City braking system to automatically brake if something darts into your car’s path.

The steering wheel is a manual tilt/telescope model with the usual compliment of buttons on the hub for radio volume, phone and cruise. 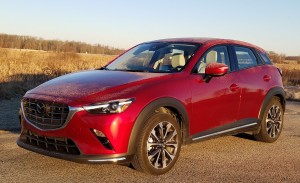 Meanwhile, climate controls are large round knobs that are simple to use, and heat was well distributed, an important point during Wisconsin’s increasingly long winters.

For the digitally minded, there are various plugs and hookups for phones, iPads and the like in the large cubby beneath the dash’s center stack. There’s also a radio volume knob on the console and a volume toggle on the steering wheel hub. Mazda also provides a large open console bin just in front of a small armrest.

I also would be remiss if I didn’t mention that the hatch in back includes a windshield wiper, particularly handy here once crummy weather sets in, or evil snow packs up there. A quick button push knocks the snow off.

As stated earlier gas mileage is good, so keeps operating costs down. Likewise, pricing is attractive, especially for first-time buyers. A base Sport model with front-wheel-drive starts at $21,365, the Touring model moves to $23,450 and the tested AWD GT lists at $28,120, including delivery.

Other than that $710 premium package with the heated seats and wheel (well worth it), the test car added little, just a rear bumper guard and door sill trim plates for $100 each. Then there’s the $595 upcharge for the Red Soul Crystal Metallic paint. I feel it’s worth it as this is easily Mazda’s best color currently.

Total damages are just $29,625 for this sporty handling fun little crossover with AWD. And a vehicle elbowing its way below the $30 grand figure these days is worth a test drive if you’re looking for new wheels!