Like Porsche when it launched the unlikely Macan, its first sport-utility vehicle, Kia has crushed expectations by creating a premium level sports sedan with its 2018 Stinger.

Some folks likely were still stuck on the notion that the South Korean car firm only churned out econoboxes and low-cost mainstream vehicles. But they are living in the past.

Kia has broadened its lineup in the past decade and has been hitting home runs on initial quality, beating the competition on content and price and destroying it with styling that leads the industry. Its Optima is still the best-looking mainstream sedan on the market, and has been for going on 8 years.

But Stinger (a great name) takes Kia in a new direction, mainly into a head-to-head battle with German luxury sport sedan makers. It’s being compared with the Audi A5 Sportback and BMW 4 Series Gran Coupe. That’s good company, and it’s winning those comparisons.

First, this is a luxury car to be sure, but one that pumps up the fun with distinctive sporty looks. Stinger comes in five trim levels too, and I tested the top-line GT2 with all-wheel-drive. It’s not inexpensive, but then neither are its competitors.

The base Stinger 2.0T packs a 255-horsepower 2.0-liter turbocharged four-cylinder engine, but the tested GT2 blows away the competition with a 3.3-liter turbo V6 that pumps an aggressive 365 horses.

By comparison, the top-level Audi S5 Sportback delivers 354 horses and its A5 cousin with a smaller engine has 252 horses, or 3 less than the base Stinger. On torque the Stinger wins too, at 376 lb.-ft. for the V6 vs. 369 for the Audi S4. Bimmer fans may not like it, but the Stinger also beats BMW’s 4 Series, which has just 320 horses and a torque rating of 330.

Kia claims a 0-60 mph acceleration time of 4.7 seconds compared with the Audi’s 4.5 and the BMW’s 4.9. If you want another opinion, Car and Driver magazine puts the Stinger at 4.6 seconds when wearing performance tires.

OK, you get it. The Stinger is fast. That V6 sounds great too. No, it doesn’t growl like a gutsy V8, but it roars with a steady horsy tone through its quad exhausts. And it works near perfectly with an 8-speed automatic transmission. Paddle shifters also come with.

Drive modes? The Stinger has five. Comfort is the default and the car drives perfectly well in this mode. Steering is precise and power is strong. Sport, naturally, firms that wheel almost too much and boosts the low-end power as the transmission holds low gears longer to improve acceleration.

There also is Eco, which I doubt many will use, plus Smart, which reads your driving habits and boosts power as in Sport if you tromp the accelerator. But steering remains more comfortable, as in Comfort mode.

Ah, then there is Custom, where the driver can program the steering effort and acceleration ability to always be the mix he or she wants. There’s launch control too for the raciest of buyers!

Handling feels refined and sports sedan precise, even in Comfort mode. Stinger is a blast to take on winding roads as it turns into an apex well and avoids untoward body lean.

Ride is sporty, but helped by the car’s 114.4-inch wheelbase. Still, the shocks are trimmed for performance and the test car rode on 19-inch Z-rated performance tires. If your tushie is tender, this one may not be for you.

Additionally this version came with AWD, which should have helped more in the snow and cold that we had on during the drive. But I was still able to break the backend loose when accelerating aggressively out of a corner. I suspect some good all-season, or winter, tires would help that situation.

Brembo brakes, with red calipers, also are standard here. They work great and look sporty too.

Inside, Stinger delivers a quiet interior as expected in a luxury car, and the seats are superb for the aggressive driver likely to buy this car. Both front seats are powered, the driver’s seat being 16-way adjustable, including side bolsters that can be tightened and a lower cushion that will extend. Two memory settings also are standard.

Front seats are heated and cooled and the steering wheel also is heated, a boon on sub-zero mornings. I feel spoiled now! However, the rear seats were not heated, a bit of a surprise, but there are large air vents to help warm rear seat riders.

The interior is gorgeous too, the silver test car having a black dash with dark red soft Nappa leather seats and door trim to create a more youthful look than you get in most German cars, which usually come with all black interiors. Trim is smoked chrome mostly, with some gloss black trim by the dash’s side air vents. Speaker covers also are chromed to look jewel-like and the steering wheel is covered in leather.

Again Kia, like its cousins at Hyundai, has created a stellar dash design with everything easy to see and use. All buttons are large and knobs equally easy to grab, even when wearing thick gloves. So many of today’s cars are designed in California that they are not so friendly to gloved hands. Not a problem here! 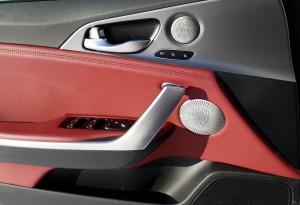 Most of these also are available in an ADAS package for lower trim levels.

Overhead is a sunroof. I didn’t crack it open since the weather was so cold, but I did slide the sun shield back a couple of sunny days. Stinger’s sun visors also slide and and there’s a HomeLink system overhead.

Audiophiles also will like the booming 720-watt Harman Kardon stereo with 15 speakers and subwoofer. It’s standard here and on the GT1 model. 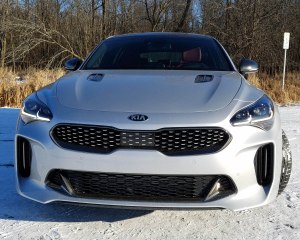 There’s more though. Stinger GT2 comes with a power tilt/telescope steering wheel, power passenger lumbar support, a limited slip differential, rain-sensing wipers, and a power trunk. That can be opened by standing behind the car with the key fob in your pocket. Found that out one morning as I was shoveling snow from behind the car. Pop! The trunk lid powers up!

Speaking of Stinger’s tail end, the rear seats also split and fold flat to increase an already generous cargo area. And I like these snazzy taillights with the light bar across the trunk lid. Fun!

On the practical side, wait, this is a sports sedan so who wants practical? Well, gas mileage is still a concern for most of us. I got just 16.6 mpg in mostly city driving and no day reached more than 10 degrees. Cold saps gas mileage. The EPA rates the car at 19 mpg city and 25 mpg highway, on par with other sport sedans. Premium fuel is recommended.

Now here’s where Stinger will get a lot of attention, its price.

The base 2.0T model begins at $32,800, including a destination fee. That model is rear-drive and has the smaller turbo 4-cylinder engine. But other than that it’s not a stripped down model. There’s the same 8-speed automatic tranny, Drive Mode Select, heated front seats, 8-way power driver’s seat, 7-inch touchscreen and rearview camera.

Move up to the 2.0T Premium and a sunroof, 8-inch touchscreen with navigation, power tilt/telescope wheel and more is added. Each trim level adds to that list.

I know this isn’t in everybody’s price range, but for folks considering a luxury sport sedan and craving strong performance, great looks and even value, the market just grew by one, and in a big way!