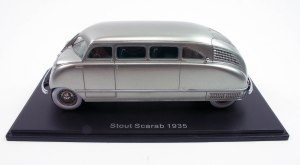 I’ve seen two Stout Scarabs in my life, one up close and personal, one in a museum. Both were amazing.

The Scarab was a minivan before anyone even thought of minivans. It’s a rounded aerodynamic bug of a car, before the world was aware of the VW Beetle, although it may have already been on Ferdinand Porsche’s drawing board in the 1930s. It’s light before automakers were thinking of weight reduction.

The Scarab came from Stout Engineering Laboratories, later Stout Motor Car Co. in Detroit and was designed in 1932 by William Bushnell Stout, an aviation and car engineer. He believed in strong lightweight bodies, so created a unitized body structure from aluminum aircraft metal with the help of designer John Tjarrda. The result was a car that would seat at least six and weighed less than 3,000 lbs.

In back they dropped a Ford V8 and with that rear-end placement, eliminated the weighty driveshaft found in other cars. Unlike most cars in the 1930s, the Scarab had no running boards and used coil springs and independent suspension at all four corners for a better ride. Seating inside could be reconfigured too to face backward or forward.

It would be nearly 50 years before Chrysler re-imagined this one-box design with its then surprising minivans. It also developed a variety of seating options.

A few other unusual features, the Scarab had no rearview mirrors, its headlights were behind a vertical-bar grille and passengers entered the right side of the vehicle through one central door. This too may have been a precursor to today’s sliding rear doors on minivans.

Then there’s the scarab theme, Egyptian at its core. Stout created the winged nose emblem and beetle-like logo to reflect that theme. Plus that Art Deco metal trim at the rear has an Egyptian air to it.

Plans were to hand-build 100 a year, but only nine were said to be made. Not surprisingly the orders didn’t roll in as the Scarab was priced at $5,000 more than triple a fine luxury model of the day.

NEO’s model features fine body lines and seams that give a certain edginess to a car shaped like a Twinkie. This is Art Deco at its automotive extreme. 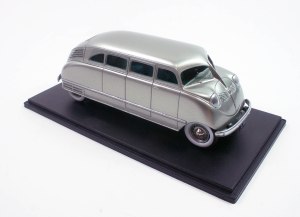 The Scarab had just the driver’s door on the left side, and one on the passenger’s side. Certainly the stubby buglike face of the Scarab is interesting, with vented headlight covers and an ornate winged design on its short hood. But the tail, where the engine resides, is an ornate interpretation of Art Deco design along with air-cooling technology. Fine photo-etched metal  grille work extends from atop the indented rear window to the bumper. It fans out at the bottom to allow air into the engine bay.

NEO also produces fine matte chrome bumpers, tiny but realistic looking taillights and dark blue Montana license plates front and rear. The Scarab has grate work patterns over the rounded rear quarter panels and more on the lower extremes that cover the rear wheels. There’s also a gas cap high up on the driver’s side rear window pillar, or what would be the E-pillar in the Scarab.

Inside the interior is a light turquoise color with twin front seats, one seat on the driver’s side in the second row and a bench seat in back. The dash is modestly visible and sports a big gauge in the dash’s center. Think of it like a navigation screen in today’s cars. The steering wheel is black with red hub.

Our review model comes from American-Excellence and as with other NEO models in this scale, is expertly executed and comes in a sturdy acrylic case.