You gotta admit, the name Rocket Bunny sticks in the ol’ memory banks.

So when I saw Autoart has a new 1:18-scale model of the Toyota 86 in Rocket Bunny trim, well, I requested one to see just what a Rocket Bunny Toyota looked like.

What is a Rocket Bunny? You may be asking. Well, if you’re not a tuner car guy or under age 40, this aftermarket aero kit maker may not be on your radar. It should be though because Rocket Bunny / Pandem Aero Kits is waking up the custom car look for Drift-style boy-toy street racers.

These are sold in the U.S. via GReddy Performance Products that makes everything from special high-perf exhaust systems to electronics, engine parts and brake and suspension pieces to tweak performance.

The cool panels added to the Toyota 86 give it a more muscular look with bigger wheel well flares and racy nose and tail treatments. 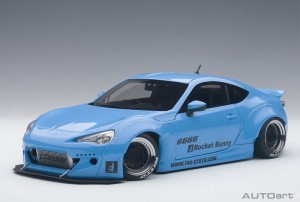 The Toyota 86, by the way, starts with ample power for a 2+2 sports fastback with a bit more than 200 horsepower from its Subaru-built and designed boxer engine. The car is lightweight with an aluminum hood and its engine mounted as low as possible in the chassis to provide better balance and a low center of gravity. This is a rear-drive model  with a top speed of 145 mph and a 0-60 mph time of about 6 seconds out of the box.

Autoart creates a stunning bright metallic sky blue young guy road rocket out of its already fast-looking Toyota 86, the cousin to Subaru’s BRZ, and what formerly was a Scion FR-S. Remember Scion, the Toyota youth brand? 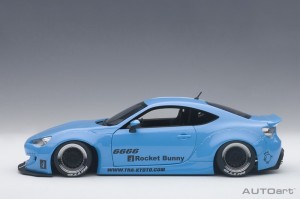 This looks great featuring the aero kits Rocket Bunny made famous, at least in some circles. This includes the bolt-on aero skirts that put a more muscular bulge over the front and rear wheels, a modest tail wing and black diffuser below the tail and surrounding the twin chrome tail pipes, plus a monster black chin spoiler that looks like a spatula about to scoop up some pancakes, or in this case, road pizza.

Autoart’s model is another of its fine looking composite bodies that looks and feels like die-cast metal, but is lighter and less expensive to make, keeping its pricing down. Plus this model features opening doors to better expose the car’s interior.

Tuners and rallycross type facing fans will enjoy this car’s look from the massive open grille up front with the exposed equally large radiator, to the projector beam headlights with textured metallic surrounds inside the enclosed light fixture.

The black and chrome wire mesh wheels are spectacular too and are neatly tucked into treaded Nitto race tires. Front wheels are steerable too for creating a more interesting static pose.

There’s a black aero antenna on the roof, blue and black sport mirrors on each door, body-colored door handles and black Rocket Bunny decals and logos on the doors and front fenders just in front of the tires.

All windows are trimmed in black and there are big black windshield wipers here too. Rear taillights are realistically detailed and carry the tuner look and there are twin chrome exhaust pipe tips in back.

Inside there are black race seats with black seatbelts and flocked foor covering. The dash is well detailed with gauges visible and metallic trim on the door handles, air vents and pedals. The steering wheel is a three-stalk model and there are a big shifter knob on the console and large park brake handle. 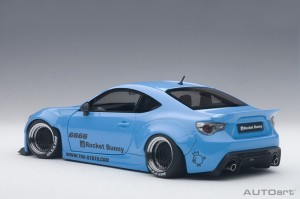