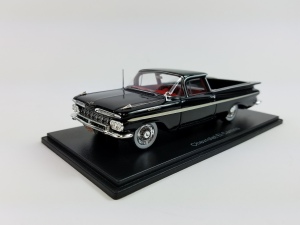 Today the blending of cars and trucks seems natural as SUVs and crossovers have become the preferred mode of personal transportation in the United States. But in the late 1950s and early 1960s such a thought was downright odd.

Ford stirred the beast first when it created the Ranchero and within two years Chevrolet answered with El Camino, basically wagons made into pickups with a big open bed behind the enclosed front seat compartment. Some considered El Camino a coupe utility pickup, a fairly apt description.

NEO has created a sharp 1/43 scale version of the 1959 El Camino in black with a red interior and plenty of chrome nose and tail.

The original El Camino was only around two years 1959–1960 and was made in GM’s Arlington, Texas plant. It rode on the 1959 Chevy Brookwood platform, a new two-door station wagon that was longer, lower and wider than existing full-size Chevys.

El Camino was a hit, partially because it could be ordered with any full-size Chevy drivetrain. So it quickly outsold the Ranchero with roughly 22,000 El Caminos vs. 14,000 Rancheros. The rolls reversed nearly exactly for 1960 and Chevy pulled the plug on El Camino while Ranchero continued on the Falcon platform. El Camino would return in 1964 and be made through 1987.

For 1959 El Camino rode on a 119-inch wheelbase and was 210.9 inches long, a big vehicle, even in those days of  Detroit land barges. Notable was the corrugated sheet metal floor, the first steel bed in a Chevy pickup of any sort. But the bed held just 33 cubic feet of cargo, not up to pickup standards and ultimately a strike against El Camino.

Still, they could move. All had V8 power, including a 283-cid Turbo-jet V8 with two- or four-barrel carburetors, a Turbo-Thrust 348-cid V8 with four-barrel or triple two-barrel carburetors producing 335 horsepower, and a 250- and 290-horse 283-cid Ramjet Fuel Injection V8. Reports show a 0-60 mph time of about 7 seconds with a top speed of 130 mph.

NEO makes a handsome model of the 1959 version, distinguished by its lack of Chevy bowtie on the grille. The 1960 model had one. 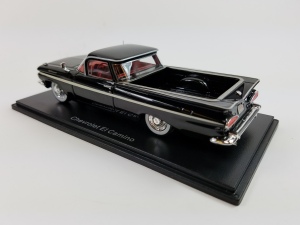 The chrome photo-etched grille looks sharp as do the quad headlights and big chrome eyebrow trim above them. I like the chrome arrow tips atop the front fenders with PE trim that runs to the windshield’s base. That PE chrome also rings the front, rear and vent windows, a silver trim accent is painted up the A pillar and around the roof’s back side.

There’s equally nice trim around the El Camino’s bed, including what look to be snaps or rivets where a cargo cover could be snapped in place. A bold creamy accent stripe also is painted along each side of the truck.

The rear bumper, exhaust pipes, and mufflers are chrome as are the door knobs and driver’s side mirror and antenna on the front passenger’s side fender. The cat-eye taillights look a jeweled red with chrome trim and there are full wheel covers in chrome too, plus treaded wide white-walled tires.

El Camino features 1959 Ohio plates front and rear and the side windows are sealed to keep unwanted dust off the red interior. This includes a dual cockpit cowl with detailed gauges, radio and glove box on the dash. The steering wheel features is a dual chrome hub with shifter on the tree.

Seats are red ribbed with multi-color red and gray stripes.