See if you can relate to this. Summer trips with the fam 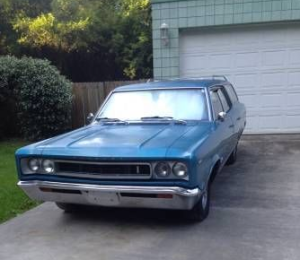 It’s the mid 70’s or 80’s when the whole family piled into the family wagon to go on vacation. It could have been west like I did with my family in our 1967 Rebel Cross Country wagon. Almost identical to this one I found in the classified sporting the same Strato Blue Metalic color. Yup, I have all kinds of stuff still rattling around in my brain. Mom, Dad, and my two younger sisters went to Yosemite to see Old Faithful and stuff like that and to the Washington DC. Sound familiar? You could have gone a bunch of other places but the common bond we have is the family wagon. When I was growing up just about all of my friend’s parents had a sedan that dad used to go back and forth from work, and a wagon mom used for hauling the kids around. Now flash forward to today where that sedan might be a sports sedan and the wagon replaced with a minivan or crossover. I miss those days so come along with me, and my iPhone, in my travels and reminisce.

These were some of the coolest wagons around mainly because of the surfing culture during the ’50’s and ’60’s. Check out this 1958 Pontiac Wagon I spotted at a car show this past summer in Wisconsin. While not a really “woody” woody, there was some wood trim on the car. They owner had it all decked out ready for the beach. We really don’t have any big waves here so not sure where they would use the surf boards located on the top.

Is there anything more classic than a Ford Country Squire? No real trees died in the creation of this wagon. The frame is made out of some synthetic made to look like wood when the inset is nothing more than ordinary vinyl. Ford also made the Squire trim available as an option on the Falcon, Fairlane, and the Pinto in the 1970’s. This Pinto that I spotted in a local parking lot could have used

the Squire trim. Wait, isn’t there something about putting lipstick on a pig? Whoa, who’s calling the kettle black because American Motors also had fake wood as an option on all its wagons including the Pacer, the pride of Kenosha, WI, made from 75-79. This is a model I built of a company car my dad had while working at AMC. Yup, I put on the fake wood. Boy I’m seeing the dust on the car now. I think it needs a bath.

Hey let’s not forget Chrysler who brought us the K car in 1981. Initially costing Chrysler $1 billion over three years to develop. That’s big money now but even bigger in the ’80’s. The platform which could be stretched, smoothed, chopped, and trimmed was the basis for many of Chrysler’s vehicles including the minivan which defined that new category. I found two examples of K cars. The Dodge Town and Country wagon (lower left) looked like it had come off the production line recently. I couldn’t believe a K car could be so clean since they were known to rust rapidly like this other I found. One thing is amazing is that it is still on the road even though Chrysler stopped production of the K cars in 1995. 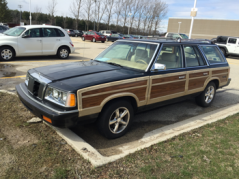 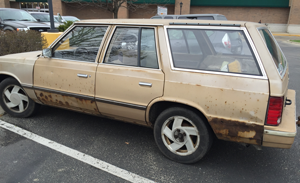 In the mid-80’s the wagon started getting bigger, after all families had more stuff to haul around which is what made this 1982 Mercury Grand Marquis Colony Park which could welcome aboard 10 a popular car. This beast tipped the scales at just under 4,000 pounds was based on the Ford LTD and needed its Ford Windsor V-8 302 to get it up to speed. 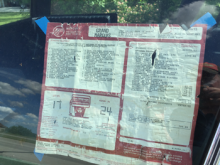 The car was like an aircraft carrier to turn taking up 39 feet FYI: Navy Aircraft carriers take five miles to turn around. I know this because I was fortunate to sail on the Nimitz for a Tiger Cruise in the early ’90’s. The average width of a 2-lane road in the U.S. is 28 feet according to Quora so there would be at least one or two y-turns involved in getting this barge to go the other way. For a ’82, this wagon was in great shape and a buy at 2 grand. It even had the original window sticker and did not last on the market long because the next week when I rode by it was gone to some lucky new owner of a piece of american history.

While were on the topic of land barges, nothing beats the Chevy Caprice Estate and Buick Roadmaster Estate wagons in the late ’80’s-early ’90’s. Because of their wheelbase, 115.9 inches and weight, 4,486 pounds, they

utilized a 5.7 L LT1 engine with dual exhaust. The same engine found in Corvettes, at the time good for 260 hp, and it needed all 260 to get it up to highway speeds. The Buick featured a “Vista Roof”, a la the Oldsmobile Vista Cruiser, a fixed sunroof over the second row seats, was standard. I love those vista roofs. With an MSRP of $25,265, Buick’s Estate was GM’s most expensive and most fully equipped entry in the market. Now you can pick up one in good condition for around $3,300 according to KBB. The last of this dying breed rolled off GM’s Arlington Assembly facility in Texas in 1996. The factory was converted to body-on-frame Chevrolet/GMC Suburban.

I still see these beasts on the road from time to time and since I’m into big radio control airplanes, six and seven ft. wingspans, imagine how many of mine I would fit in this wagon.

American Motors Corporation’s Eagle was way out in front of the 4×4 wagon trend. Everybody thinks Subaru was the first to produce a 4-wheel drive passenger car but the Eagle was manufactured 17 years before debuting in 1979. It was based on the AMC Concord and consumers could buy it as a sedan, hatch, and wagon (pictured here at a local grocery store lot). 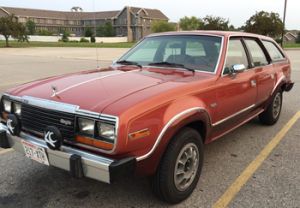 Engine choices were a four-cylinder, two straight sixes, and a 304 V8. The 4.2L 258 was my choice followed closely by the 304. The four-cylinder made the Eagle a bit underpowered if it was towing something. With AMC struggling in sales (name a time they were not past the ’60’s), the Eagle was exactly what they needed with 121,293 cars sold in its first year, easily beating every other the Concord and Spirit combined.

The end of the dusty road

What killed the wagon as in the examples in this post? Lots of things. Crappy fuel economy was one. With the exception of the Pinto and Pacer, these were huge cars requiring big V8 to motivate them equaling up to somewhere in the mid teens for MPG. The K car, which brought us some of the cars described here, also brought us the minivan from Chrysler which got much better mileage. Lastly, our new-found love for the SUV (Sport Utility Vehicle) and more recently the CUV (Crossover Utility Vehicle). Now everybody piles in the minivan or SUV to roam west but those trips will never be the same as the station wagons and America’s love affair with them.