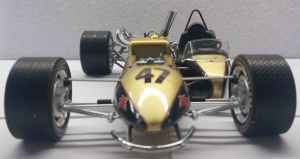 The mid-1960s were a wild and revolutionary time for race car design and technology at the Indianapolis 500, the predominant race in the world at the time.

The era saw roadsters with their engines in the front replaced by racers, such as Lotuses, with engines in the rear. There were a variety of engines from Offenhausers to Fords to Chevys, plus some jet turbines that darned near won, twice.

Then there was the sidecar roadster created by master mechanic and designer, Smokey Yunick, who had already taken on the stock car world at Daytona and entered several cars over the years at Indianapolis, including a 1962 roadster with a giant wing over the hood and driven by 1960 winner Jim Rathmann. 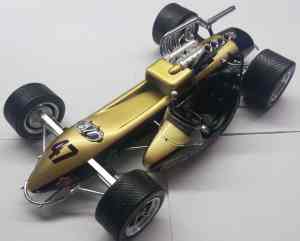 But by 1964, a pivotal and also disastrous year for Indy due to its worst and most terrifying crash that killed two drivers, Smokey had created what was commonly known as the sidecar racer, his Offset Roadster with sidecar. It carried his usual gold and black color scheme, and now Replicarz is creating it in 1/18 scale resin for us diecast collectors.

Now Replicarz plans to deliver its 1/18-scale sidecar racer in late April to early May, just prior to the 101st running of the Indy 500.

Smokey Yunick was a rebel and always looking to bend the rules or take full advantage of any loopholes he could find in them. He was an inventor, a creator, and would try most anything. This 1964 offset roadster proves it. 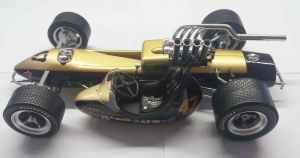 Yunick called this his capsule car, with the sidecar or capsule being held onto the main part of the roadster by five bolts. Originally the car was to have a turbine engine, but when that fell through, Yunick put a 4-cylinder Offy (then the most popular engine at Indy) into the car. Its suspension included a variety of parts from the Pontiac Tempest, a car Yunick was familiar with from stock car racing.

Supposedly Yunick got the idea from his WWII years when he first saw the BV 141 reconnaissance plane with an outrigger layout. The thought at Indy was to balance the central portion of the car front to rear and then hang the driver’s pod on the left side to bias the weight in that direction as the car would only turn left on the Indianapolis Motor Speedway’s oval.

Ultimately George Hurst paid Yunick $40 grand to name the car the Hurst Floor Shifter Special and off the went to Indy to qualify with NASCAR driver Bobby Johns at the wheel. Johns was an experienced racer that won two NASCAR races and nearly won the 1960 Daytona 500. He was the first NASCAR regular to run at Indy, something that would soon change as Cale Yarbrough and Bobby and Donnie Allison would follow in a few years.

Sadly Yunick’s sidecar racer never quite made it to qualifying speed and Johns spun and wrecked it during its only qualifying try on the last day of time trials that May. Today the car is part of the IMS Museum’s collection.

So far we’ve just seen these beautiful photos of the Replicarz model, but it looks to be up to their usual standards of fit, finish and detail.

We’re told the hood will be removable to expose the Offy and you can see in the photos that the cockpit includes the square steering wheel Yunick designed to give the driver more legroom and hand room.  The gauges are to be glass-faced and the cockpit will include all the usual pedals, shifters, and controls of the day.

A black and gold finish with authentic graphics from the car’s on-track action also look sharp. We hope to have the real deal here for review by next issue. 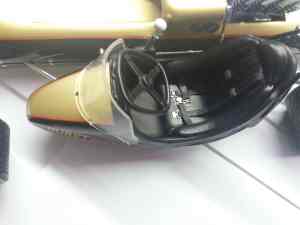 Thanks to Brian at Replicarz for an early look at this pre-production model.