Back when I was kid in the 1960s and ‘70s a large luxury sedan meant a Buick, Lincoln, or certainly a Cadillac.

Today, nearly every car maker has a large luxury model, some on the sporty side, but more favoring the luxury end, emphasizing smoothness and quietness. As us Boomers age, both sound pretty good. But we’ve been smitten with SUVs and crossovers, so the big sedan market has languished, shrunk like cotton elephant bell jeans that went through the wash too many times.

Into this market Kia re-introduces its Cadenza, a large luxury sedan that falls between its even larger K900 and its popular mid-size Optima. Competitors include the likes of Chevy’s Impala, Toyota’s Avalon, Ford’s Taurus and Dodge’s Charger, one that definitely falls more in the sport sedan category.

I praised the first gen Cadenza for nearly everything but its ride. Consumers met it with a yawn. The revamped 2017 model should receive cheers from Boomers who like soft leather seats, a supple ride, excellent power and all the electronics we’ve grown to expect in a car, especially one starting north of $40 grand.

Before that figure scares you off, consider the base Premium model (see what they did there with naming?) starts at a reasonable $32,890 and the Technology model at $39,890. Both include delivery and both have all the same mechanicals as the tested top-level Limited, which lists at $45,290 with only a pittance of options even available beyond that.

Cadenza feels lighter than some of the comparable sedans, but solid, well-built and absolutely what you’d expect in comfort and quiet levels found in say a Lexus or Infiniti.

Power is downright spunky when it’s in Sport mode, one of four power modes, also including Eco, Comfort and Smart. Each adjusts gearing, feedback from the electronically assisted steering and ride. Comfort is fine for most driving, but Sport and Smart give the car more oomph and make it a bit more fun.

Kia’s new 8-speed automatic, a Sportmatic system that allows the driver to shift via paddles behind the steering wheel if desired, is silky smooth but gives the sedan a more aggressive feel than many competitors. It’s also pretty efficient. The large sedan is rated 20 mpg city and 28 mpg highway. I averaged 22.8 mpg in an even mix with up to four aboard and during a cold streak.

I found the ride less sophisticated in my previous drive a few years back, but it has been firmed and smoothed considerably with special shocks helping the rear multi-link suspension deal with our crumbling Midwest roads. Big potholes are well controlled. No jarring of passengers here.

Handling remains lighter than in some competitors, but steering feel is more refined than in earlier models. This is an easy drive and simple to park. Braking is fine. 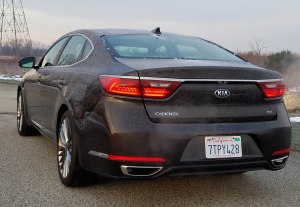 The metallic “Pluto brown” (I’d choose another color) test car’s interior was gorgeous and luxury quiet with one of the cleanest dash designs on the market.

This one had a soft black dash top with ivory lower section, ivory soft leather seats with quilted bolsters and black gloss trim on the doors, console and armrests and gray fake wood trim on the dash. There’s also satin silver trim around the air vents and on door pulls.

Overhead is a giant sunroof, which is much nicer and more attractive than the previous model’s twin sunroofs.

There’s also a heated steering wheel that both heats quickly and becomes comfortably warm, a bonus during a Wisconsin winter. Don’t know why this isn’t standard on some European “luxury” makes. I also should mention that the Cadenza’s rear seat is cavernous with excellent leg and headroom. Five large adults could travel in comfort here.

Then there’s the cleanly styled Kia dash that is basically two levels with a nice 8-inch touchscreen at the top that’s easy to use, and then buttons logically arranged on the lower level. These are big buttons for radio and climate controls making them simple to press while driving, even if wearing gloves. The screen also features a 360-degree-view camera that aids in parking, plus you can activate it any time with a dash button.

In front of the driver the main gauges uses white numbers with red needles and are extremely easy to see. Once the ignition is off the power tilt/telescope steering wheel powers up and out of the way and the driver’s seat powers back for easier exit.

There is a full host of safety features, as you’d expect, from dynamic cruise control and cross-traffic alerts to lane departure and blind-spot warnings. Kia says its blind-spot system actually helps steer the car away from an accident if it detects something in your path. I didn’t experience that during my drive.

Speaking of blind spots, the Cadenza, as do so many of today’s vehicles, has a large one on the passenger’s side where the big A-pillar and mirror combine to create a sight blocker. That was the only fault I found with this car.

There are, however, many thoughtful features to enhance the Kia’s luxury cred. In back there’s a power sun screen and manual screens for the rear side windows. This one had a power trunk lid too and oodles of cargo space too, 16 cubic feet.

I also should mention the harmon/kardon stereo, which is excellent.

Move up to the Technology model, which includes everything from the Premium and adds power folding outside mirrors with puddle lights, along with LED headlights, heated steering wheel, wireless phone charger, 19-inch wheels up from 18, an 8-inch touchscreen, the harmon/kardon stereo and automatic windshield wipers.

The tested Limited has all that and upgrades to Nappa Leather, the 14-way driver’s seat with memory and the power trunk.

There’s no hybrid model yet and this is front-drive. But really, at this bargain price for everything you get, plus Cadenza’s sleek handsome looks, it has virtually everything a luxury car owner would get for $10-20 grand more, except a fancy brand name stuck to the hood. 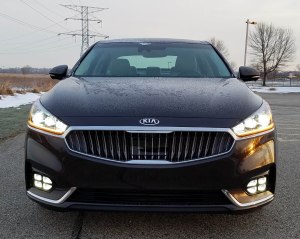 Made in: South Korea