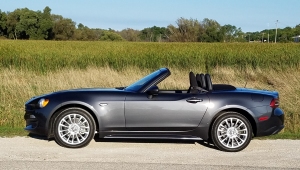 It has been a long, long time since an affordable convertible with Italian styling was available in the United States, but now we have Fiat’s 124 Spider.

Actually, we had it all along, or at least since 1989, in the form of a Mazda Miata. The new Fiat is mostly Miata, not that there’s anything wrong with that. Ah, but there are differences.

For stylistas who prefer a long hood reflecting the styling of previous Fiat Spiders and other Italian sports cars, Fiat’s restyling of Miata’s body will be alluring. And it is. The Spider looks longer and leaner than the cute, but edgy Miata.

Yet there’s amore; I mean more.

The 124’s headlights are round and taillights are rectangles, similar to the 1960s Spider, the ride is a tad smoother and well, plus there’s a bit more oomph under that long hood. Fiat uses one of its Multi-Air turbocharged 1.4-liter I4 engines to propel the roadster.

That’s not a huge upgrade in the pony department, moving from Mazda’s 155 horses generated by its 2.0-liter I4 to 160 in the Fiat. But the torque, the oomph if you will, is more substantial at 184 lb.-ft. with the turbo.

Dimensionally Fiat’s Spider is about 5 inches longer (most of it hood we suspect) and 100 pounds heavier. But what’s that among friends.

From a driving perspective the feel is nearly the same in a 124 Spider as in a Miata – simple fun. Handling is quick and light, the car feels you totally control it and can put it anywhere you want on the road. The roadster corners well on twisty roads and thanks to the turbo, it leaves a stoplight with a touch more zip than the Miata.

The turbo exhibits a little lag, but nothing serious. However, Fiat’s engine doesn’t chirp out quite as sweet a sound as the naturally aspirated Mazda motor. What I suppose that proves is you can’t have everything at an entry-level automotive price. 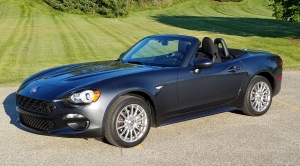 The dark metallic gray test car, the base Classico model, starts at just $24,995. Add the $995 for delivery and it clicked the cash register at just (there’s that word again), $25,990. Nothing, except Miata, comes close for a sporty roadster.

Standard here are 16-inch tires, but 17-inchers come on the 124 Abarth or Lusso models. These tires were fine, as were the brakes and the nifty short-throw 6-speed manual gearbox, as in the Miata. Ride is slightly less choppy than in Miata, so kudos to Fiat’s engineers for smoothing things out a bit, something they handle well in the tiny Fiat 500 too.

Like Miata the Fiat 124 features an easy manual drop-top. Press a button just above the rearview mirror to unlatch the roof and flip it back in one motion. Strong-armed drivers may get it to latch with the one flip, but you may need to kneel in the seat to snap it down, or ask your passenger to do it before they climb aboard. Press a release between and behind the seats and you can pull the cloth top up over your head. It’s an easy move when something untoward, like our recent daily rains interrupt one of your drop-top outings.

Seats are pleasantly snug and manually adjusted while the steering wheel will tilt, but does not telescope. That’s a tad odd. I also wish the tiny sun visors would flip to the side to help block a bit of side sun, but the Miata’s don’t either. Oh, and this, like Miata, has a small lump on the passenger’s side floor to accommodate the exhaust system. A passenger said it was mildly disturbing, but easy to live with when the top was down and you were soaking up the sun.

Speaking of which, there’s just a slight breeze in the open cockpit, barely enough to tussle your hair. A baseball cap will stay securely on the head and even on the highway my daughter and I found we could carry on a conversation.

Controls are simple, with three round dials for climate controls and a few basic buttons on the steering wheel hub. The radio is digital, slim and sticks up smartly, but shallowly, from the dash’s center stack. There’s no nav system, just a radio to adjust. Hey, if you drive this car you already know where you’re going, or simply don’t care!

There are two exposed metal ring cup holders between the seats, but behind them. That makes them awkward to get at, just as in the Miata. I would think a cup holder formed in the door panel might be a better option. Likewise a small storage box is behind those cup holders in the plastic divider between the cockpit, lowered roof and trunk.

Fiat’s trunk is slightly larger than the Miata’s, so maybe that’s where another inch of that longer body area went. In any case you’ll only be taking a couple overnight bags, or one small roller. Even putting a briefcase behind the seat is questionable, especially for taller drivers who put the seat way back.

Headroom was good too, especially with the roof down! Legroom was fine for six footers and less, but might be tighter for the truly tall.

Fuel is not a concern with the turbo, or any small roadster. I got 34.2 mpg in about 60% highway driving while I’d managed a superb 36.5 in the Miata. Both prefer premium fuel and the EPA rates the Fiat at 26 mpg city and 35 mpg highway.

A couple more trim levels add enough to the price that you can hit $30 grand. Beyond the fine and economical Classico is the Abarth that bumps power up another 4 horsepower and adds a sport suspension that likely will tighten up the ride, not necessarily making it better on Wisconsin or other Midwestern streets. Next up the line is the Lusso, or luxury version with leather seats, keyless entry and, like the Abarth, 17-inch tires. Sinfully adding an automatic transmission nudges the price up $1,350. Please don’t do that!

This is a pure sports car, like the Miata, and is a simple, fun and exhilarating drive simply because you don’t have a trillion buttons, driving aids, bells, whistles, sensors or a grumbling beast of an engine to distract you. Enjoy it for what it is. Ciao! 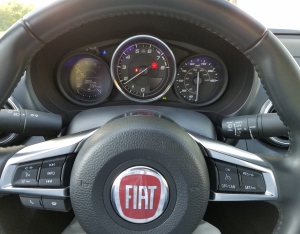