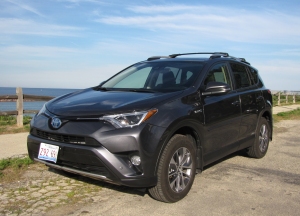 Funny, but I enjoyed driving the new Toyota RAV4 hybrid more than its gas-powered model that I had earlier this year.

This one seemed sportier, and that’s a contradiction to all things hybrid. Power seems a bit better, and is with a combined 194 horsepower for the hybrid vs. 176 for the gas-powered model. But handling seemed much more precise and sporty too.

RAV4 is a small ute/crossover and easy to park and steer. The wheel feels moderately light and the hybrid turns into corners well and is responsive. Wheel play is minor.

And while compared to the standard model it has more ponies to power it with the electric hybrid system working well via an electronic continuously variable transmission (ECVT), it’s not exactly quick. There’s still the electric whine when you let off the brake and a slow chug up to 15-20 mph. The harder you press the accelerator the crossover will respond though and get up to highway speeds fairly effortlessly. The down side is an engine that feels and sounds as if it’s working pretty hard.

Like so many vehicles, there are drive mode selection buttons, here on the bottom of the center stack somewhat hidden behind the console-mounted gear shift knob. You can go Eco to save fuel or Sport for a bit more juice to the wheels. The bump up in power is minor, but every little bit helps sometimes.

Certainly I cruised around town and on the highway easily and was rewarded with stellar gas mileage, an average of 32.9 mpg. The EPA rates this at 31 mpg highway and 34 mpg city. More of my time was in city driving, but with a couple good hauls on the freeway.

Ride remains a bit jittery with the short-wheelbase RAV4 at just 104.7 inches. Most roads it’s fine on, but when they turn crumbly and bumpy you’ll notice it where something with a longer wheelbase will better absorb rough pavement. 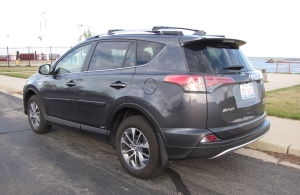 This has an AWD system, fine brakes and the now standard traction and stability control.

Note too that Toyota restyled the RAV4 exterior for 2016 and it looks cleaner and more svelt. I also like the way Toyota designers have brought the RAV4’s nose to a bit of a point to give the crossover a little crisper profile.

Inside, I liked the RAV4’s layout and interior, beyond its cheap feeling visors (with extenders) and center console storage bin. The test vehicle was a dark metallic gray XLE, not the top-level Limited, so no leather seats.

Still, the black cloth with gray stitching was comfortable and the front seats supportive. They are manual, but easy to adjust and the driver’s seat includes a pump handle to raise the seat height.

This is a roomy interior that easily holds four adults and several riders commented on the comfortable confines.

The test vehicle’s dash was attractive and well laid out. The dash was black with matte silver trim that extended to the doors and the lower dash was a padded leather-feel material with gray stitching. Gauges are backlit and all are well arranged. The steering wheel is a manual tilt-telescope number with radio, phone and trip computer buttons on the hub.

Toyota presents a handsome and useful center stack too, and dual climate controls come on the XLE. However, just a 4.2-inch radio/nav screen is standard. The test unit though added a monster convenience package for $2,060 that included a 7-inch high-res split screen with backup camera.

Other key elements of that package included the blind-spot warning system with rear cross-traffic alert, plus parking sensors, dynamic cruise control and systems that watch for pedestrians and possible collisions. The Entune infotainment system comes with this too along with about every digital hookup you can imagine from MP3 to Bluetooth and HD radio.

Strange though, it did not include heated seats and those weren’t among the numerous add-ons that pushed the RAV4’s cost up $2,055. Many of these I feel should be standard equipment, such as door edge guards, a cargo cover and roof rack crossbars.

But standard on the XLE is a power rear hatch and sunroof. And I like the two separate large cup holders in the console, plus a flat rubberized area that’s perfect for laying a cell phone in while driving.

A couple other pluses include an inside hatch release and inside fuel-filler door release.

Under the hatch is an average sized cargo area, but naturally the rear seats split and fold down to extend the space. However due to the hybrid system under the cargo area those seats do not fold entirely flat, but have a modest incline when folded down. You could still lay longer items in the rear, but they will not lie completely flat.

Pricing remains attractive on the RAV4, as most small utes and crossovers now press the $35 grand range.

This one got a bit option crazy with those $2 grand worth of add-ons, so hit $33,385. That’s still below the average for the market and you get the hybrid system that saves you gas too. RAV4 is still a good value overall. 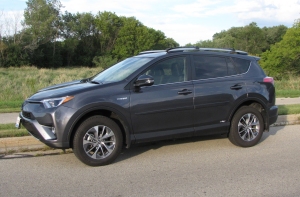