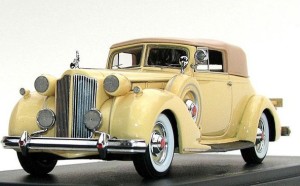 While I prefer post-war cars, probably something to do with my age, I appreciate fine car design from earlier eras, such as the 1930s.

Automodello’s fine 1:43 resin models seem to know no styling limits and certainly bridge a variety of decades. So there’s no surprise that Automodello now turns its attention to the stylish 1938 Packard Twelve, the review model being a convertible Victoria, with removable tan top over an ivory white body. I’d consider the body a creamy light yellow, but one man’s ivory is another’s yellow.

This is one of 499 pieces in this compact scale that fits so well on display shelves and stack so neatly atop other 1:43 model’s acrylic cases. That’s more than the original Twelve Victoria though, only 11 were built. Talk about exclusive!

Coming off its best sales year since its introduction in 1932, the Twelve was slightly restyled for 1938. The Twelve, so named due to its Twin-Six engine design that gave 12 cylinders, had become the U.S. equivalent of a Rolls-Royce. Its 473-cu.in. 12-cylinder engine ran smooth and quiet.

For 1938 what was known as the Sixteenth Series came on a slightly shorter wheelbase to aid its handling, plus it featured a new V-shaped windshield along with shiny steel dash and revised instrument panel along with stainless steel accents on the exterior.

The convertible Victoria was an elegant two-door with supple interior and looked somewhat presidential with the twin mirrors on its outrigger spare tires embedded in the front fenders.

By 1939 sales had flagged and the Twelve went out of production just prior to World War II starting overseas.

Yet Packard was a leader in the U.S. market for most of its 59 years, always popular with the monied and celebrity classes, with buyers including Clark Gable, Gary Cooper, Gretta Garbo and Franklin Roosevelt. Sadly it never regained its prominence after WWII, eventually merging with Studebaker, which itself folded in 1967. The final Packard was built in 1958.

This model continues Automodello’s penchant for crisp lines and seams, such as those delineating the split hood and those outlining the doors and trunk.

Cars of this era were loaded with unique body features and the Packard, being a high-end car of the day, has plenty. Start with a five-rail luggage rack that mounts above the back bumper and license plate that extends above the left rear taillight. Lights front and rear are well executed with low running lights up front on delicate metal frames, while above are the main teardrop shaped lights, common at the time.

There are silver trim lines too atop the headlight frames and small lights that blend into the front fenders. A big spotlight, as you might expect later on police cars, hangs on the A pillar just outside the driver’s window and tiny mirrors are mounted on the two fully enclosed spare tires that ride along in elegant pouches on the front fenders, just in front of wide running boards with detailed black surfaces.

The Packard has wide white sidewall tires and nicely detailed wheels and hubcaps with red Packard logos at their center. Door handles, the iconic Packard hood ornament, hood side trim panels, wipers and gas cap are all chrome and the model’s photo-etched vertical grille is extremely handsome.

The tan plastic roof pops off and a tonneau cover is included to be installed behind the rear seat for posing the model in top-down fashion. With the roof off you can see the tan interior with detailed seat cushions and a 3-spoke wheel with metal spokes. The metal floor-mounted shifter features a white knob and door trim looks like a wood panel at the top. Chrome window and door release handles are present and the dash looks like it has a metallic face and 5 gauges. Nice detail for the scale.

This Packard is well executed and more than on a par with heavy metal models such as Brooklin, which tend to be even pricier and not put much effort into detailing its interiors. Here’s hoping Automodello recreates some more 1920s and ‘30s icons. 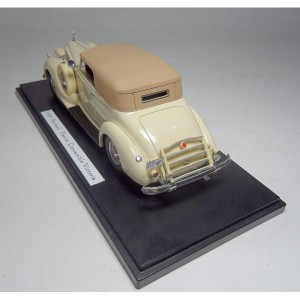