Korean automaker Hyundai’s market share is growing in the U.S. market and its vehicles are getting larger too. It appears Hyundai has adopted the age-old American car strategy of not only expanding its offerings, but its vehicles’ dimensions. 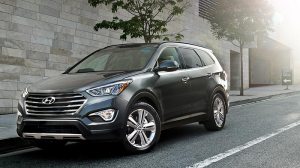 I drove the GLS AWD model, meaning it has all-wheel-drive, which naturally adds some weight and cuts its gas mileage. But AWD does give Santa Fe some of its old sport-ute functionality. Outwardly the Santa Fe looks like most other large crossovers, not much to distinguish it. In fact, it looks more like a minivan now, but with outward opening rear doors instead of sliding van doors.

The crossover’s size means it now has room for a third row seat, which is split, and will fold flat in back to boost cargo capacity that otherwise is moderate. My test unit, a Night Sky Pearl (metallic blue/gray), had no power hatch, which seemed a bit odd at the asking price of $35,180. A power hatch is optional though.

The GLS starts at $30,100, but this one added a steep $4,100 for a leather and navigation package that included a premium Dimension sound system, leather seating surfaces, heated second row seats and heated steering wheel, a rearview camera, power passenger’s seat and, naturally, the navigation system. Many of those features are nice, or would be in winter. I’m particularly thinking of the heated seats and wheel.

Functionally Santa Fe was on par with other large crossovers and minivans.That direct-injected V6 cranks a healthy 290 horsepower. You can get it to downshift and get this heavy feeling crossover rolling by tromping the gas pedal. That will affect your gas mileage. Or you can just accelerate normally, which is plenty smooth with the six-speed automatic, but feels lethargic. Coming off a turn at a stoplight and then trying to accelerate to 35 or 40 feels slow and there is some hesitation.If you plan to tow, despite the vehicle’s heavy feel, it’ll lug 5,000 lbs. of trailer behind it.

Likewise, if you want to save as much gas as possible, there is an ECO button on the dash that creates earlier shifts and cuts power overall. I rarely used it, feeling I needed the crossover’s full power to get the Santa Fe up to proper cruising speeds.

Ride though is a strong point. The 4-wheel independent suspension does a good job of handling our crumbling roads and joints between cement slabs on many city streets. Plus the interior is quiet and well appointed to keep passengers, up to seven of them, comfy.

Handling is van-like, but credit Hyundai with giving you three steering feel choices, Normal, Comfort and Sport. Sport is the most responsive, but still there is play in the wheel and the steering effort is heavy. Comfort and Normal feel pretty much the same, which is to say more vague, yet still relatively heavy. Possible a retune is in order here, or Hyundai may lose some women ute/crossover buyers. 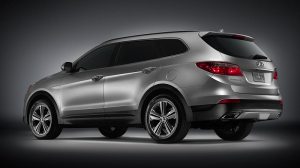 Braking is fine and all-wheel-drive is standard on this model, so traction will be solid in winter. Stability and traction control are standard here too.

Inside, Hyundai has created a luxury look and feel in the GLS, including tan perforated leather seats in the test vehicle, matched with a brown textured dash and tiny bits of fake wood trim on either end of the dash. A matte silver finish is used on the doors and door releases.

But for families, the best is probably the interior’s quiet comfort and well formed seats, plus the fact that there is that third row, in case you have to haul about half the soccer team somewhere. Kids will fit in the third row and moderate sized adults in the second row. Foot and knee room is a bit limited, but is fine for pre-teens.

I like that both front seats were power controlled and heated, plus the option package gave the second row riders heated seats, a benefit with leather seats that tend to be pretty icy feeling in winter. The thick leather steering wheel also was heated.

That wheel featured a manual tilt/telescope function and a bunch of radio, phone and trip computer buttons on the hub. The GLS model also had automatic headlights, a big covered bin between the front seats, two 12-volt outlets under the center stack, plus an open bin with USB port.Overhead is an OnStar type system, plus HomeLink on the rearview mirror. I bumped the navigation aid once just adjusting the mirror. Overhead the visors slide to block side sun too.

My only interior complaint is Hyundai’s insistence of a little chime tune that plays every time you get in the car and shut the door, and every time you shut off the ignition. This reminds me of the little ditty my washer and dryer play when they start and stop. It’s darned annoying and needs to be axed, soon. I know it’s a small thing, but I wouldn’t buy the vehicle if the dealer couldn’t turn that sound effect off.

While the test unit was pricey, you should know that you can get the same room and many of these features by going with a lower trim level. The base Sport 2.4 FWD (front-wheel-drive) starts at just $24,700 and earns a much better 21 mpg city and 29 mpg highway due to using a 190-horse 2.4-liter I4. That’s a full 100 hp less than the tested model, so might be weak for hauling a lot of kids and cargo.

Misses: Chime when you enter/exit car is annoying, heavy vague steering, heavy feel to vehicle, moderate acceleration unless you tromp pedal and no power hatch at this price. Hrmph! 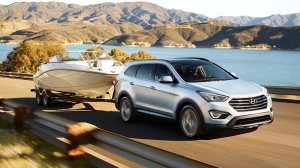